Is your kid’s school bus safe?

Is your kid’s school bus safe?

New laws that took effect this year added two new pieces of safety equipment to the list, three-point seat belts and sensors in the blind spots in the front and back of the big yellow buses, said Sue Fulton, the state MVC chief administrator.

Fulton was at a press conference at Jersey Kids Transportation in Passaic where MVC inspectors were checking school buses as part of a required twice-a-year inspection. The MVC has 100 inspectors who conduct these and unannounced inspections throughout the year, Fulton said.

Parents can look up how well their district or bus contractor’s vehicles did on the MVC’s online school bus report card.

“The report card is current. We’ll do an inspection today and you’ll be able to see it tomorrow (online),” Bednarz said.

Three-point seat belts were mandated in the wake of a fatal crash of a Paramus school bus on Route 80 in May 2018 that killed a student and a teacher and injured 43 of the 45 passengers on board the bus.

Pete Caminiti Jr., the father of a boy who was injured on the bus, campaigned for the law that requires the same three-point seat belts used in cars. Gov. Phil Murphy signed the law in August 2018.

New Jersey is now one of only seven states that mandate the shoulder and lap belt combination, Fulton said.

Another recent safety feature requires new buses to be equipped with sensors or cameras on the front and rear of buses that are notorious blind spots.

The requirement became law in January 2016 and is known as Abigail’s law, named for a two-year-old who was killed in 2003 when, unknown to her mother, she followed her mom outside and stood in front of a stopped school bus in South Plainfield. The driver was unable to see her and started to drive forward.

Sensors or cameras are required on buses built after 2018, said Jim Hooker, an MVC spokesman. The driver can monitor the cameras or sensors from a screen inside the bus, he said. Inspectors test them by setting up traffic cones in blind spots. The devices augment a swing arm in the front of buses that students have to walk around, so the driver can see them.

“Buses have changed a lot from the old low seats and unpadded seatbacks,” he said. “There are a lot of automated things.”

What is Abigail's Law? 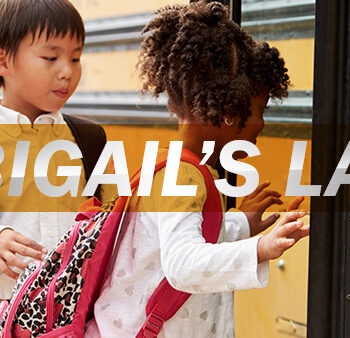